And a mere three days after Christmas, I'm sharing my last handmade Christmas pressie with you - sweet, tiny and already given to my niece on Christmas Day.   It's a Mermaiden doll from Hillary Lang's lovely 'Wee Wonderfuls' book - you can see Hillary's Mermaiden on the front cover  (can I just digress for a minute, and say that whenever I (or anyone) says "It's a ...", I always say 'croquet bush' to myself, because of that 'Favourites' chocolates ad on TV, do you know the one?  It's the same with anyone saying "don't touch it" ... are you with me or have I lost you? :-D). 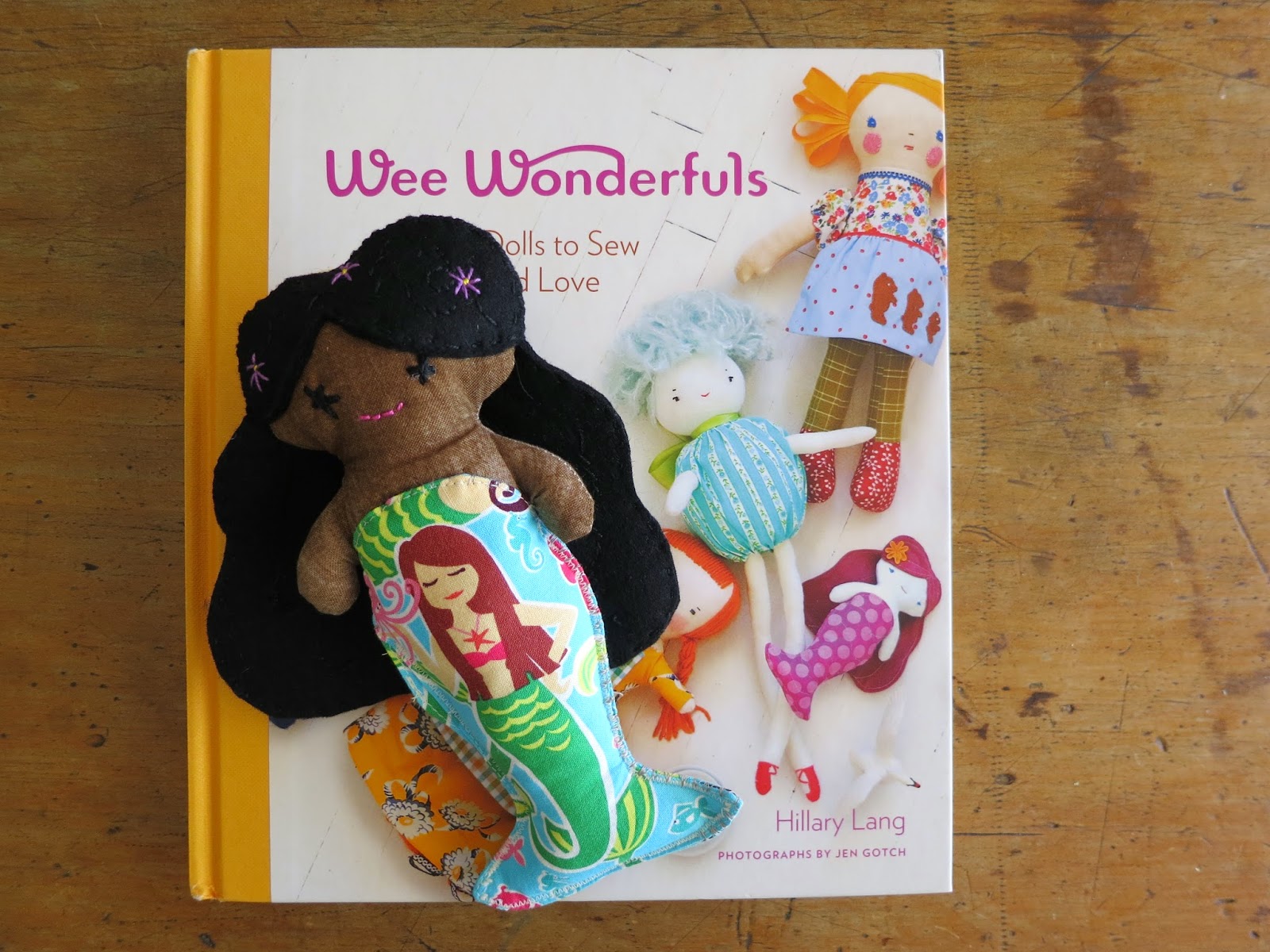 Anyway, back to Mermaiden.  I used a skin-tone fabric for her body, a long-stashed Alexander Henry print for her fin, and black wool felt for her hair, and added a few (a lot of) little decorative stitches into her hair too. 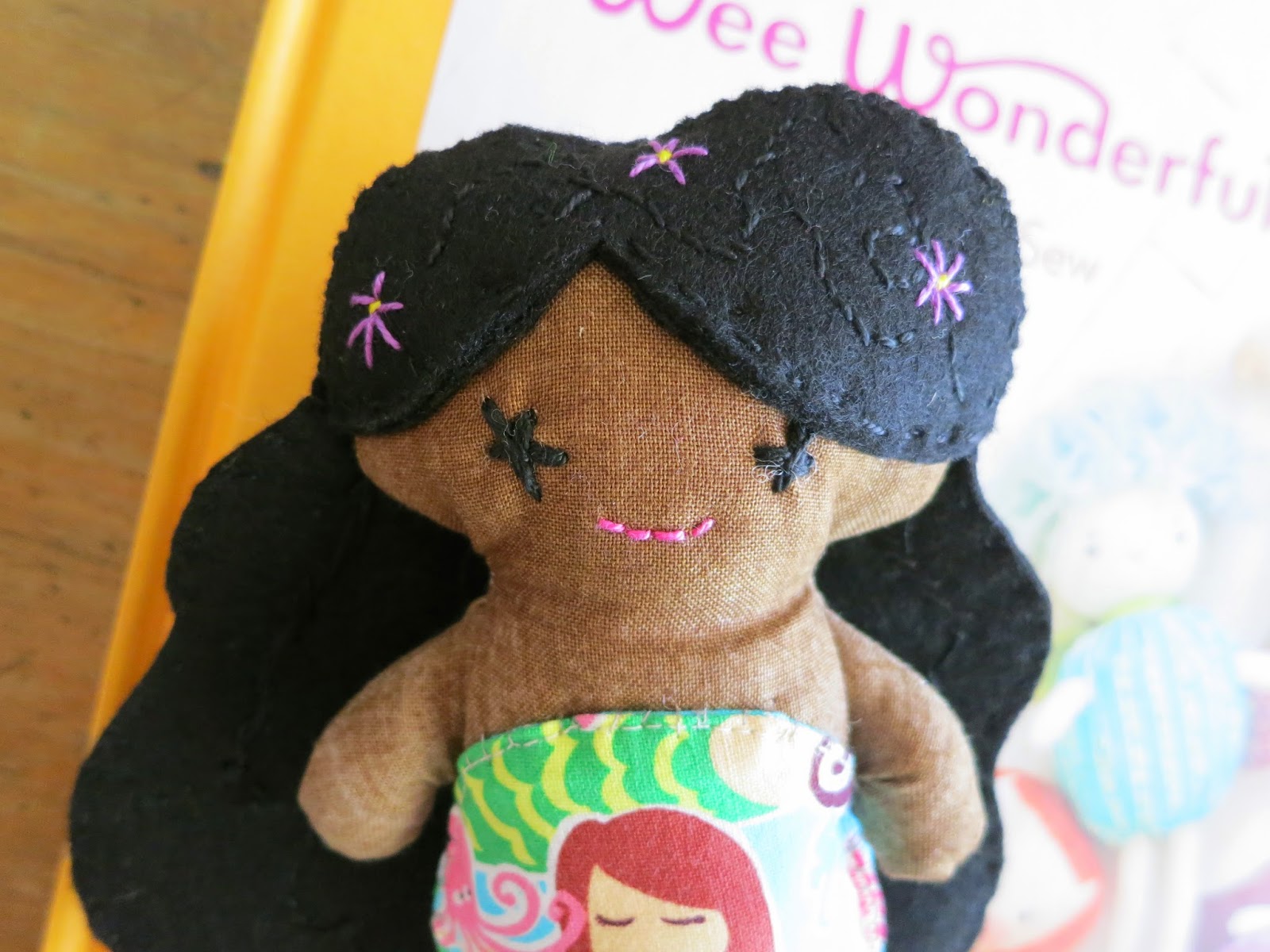 My hand-stitching to sew the mermaid inside her fin are not good.  I can sew pretty neat little decorative stitches no worries, but hand-stitching that is supposed to be tiny, hidden and for a purpose?  Not so good. 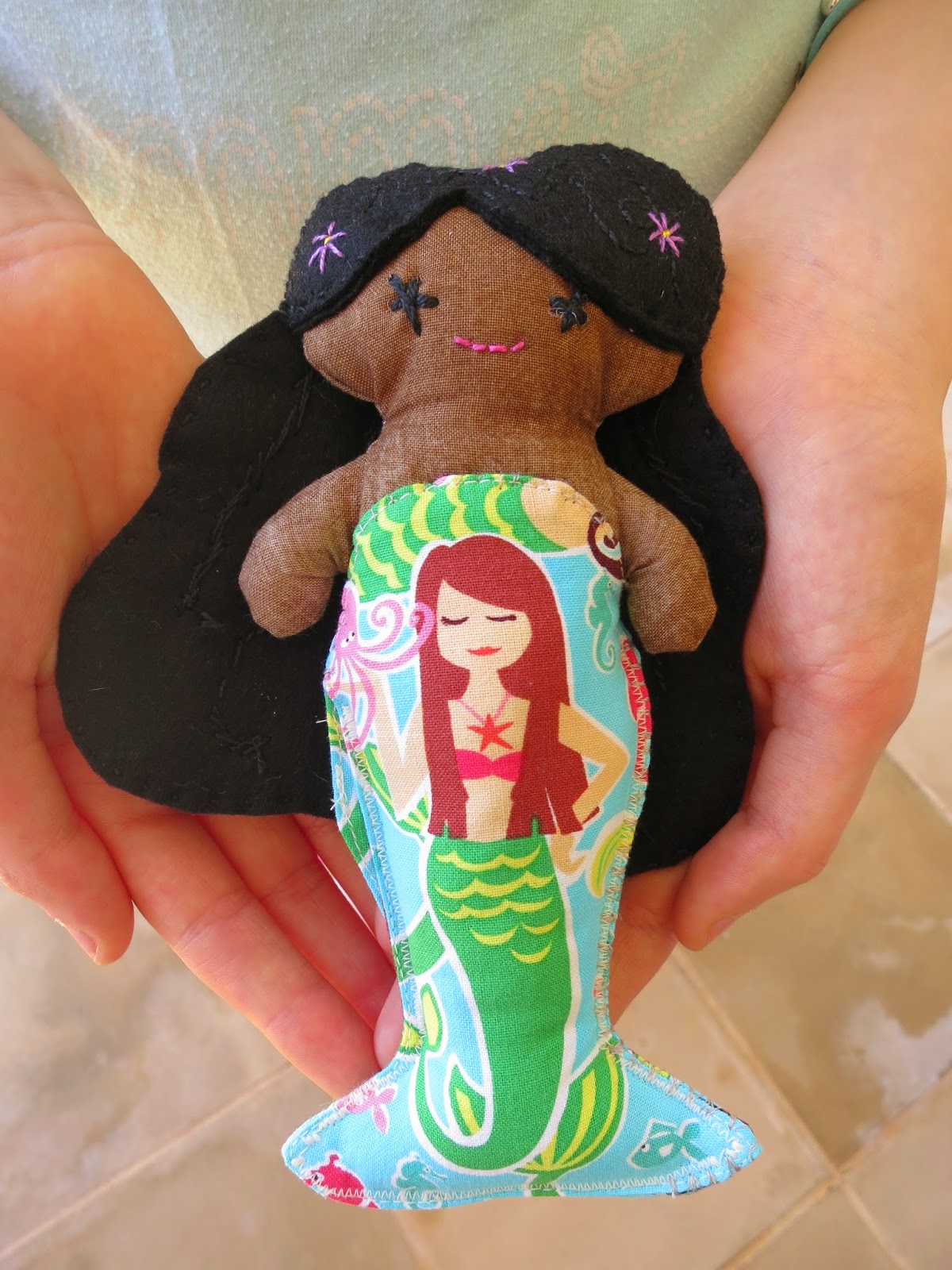 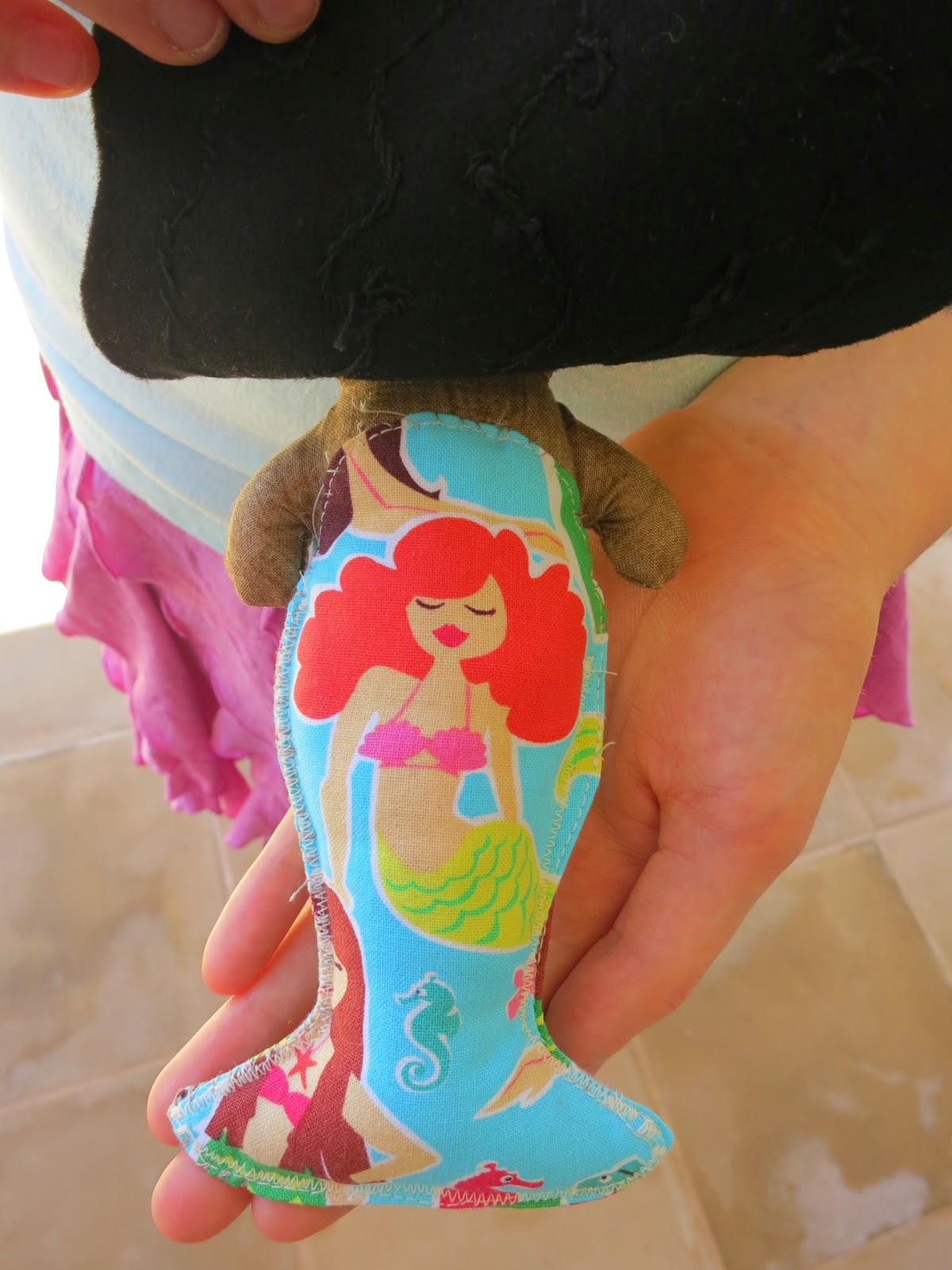 Mermaiden is really sweet, and a pretty fast little pressie.  By far the most time-consuming part was hand-sewing her hair, since I added in so many stitches - there's a lot of stitching on the back too - a couple of hearts and my niece's name-initial - but I forgot to take a pic of that before giving her to my niece on Christmas Day. 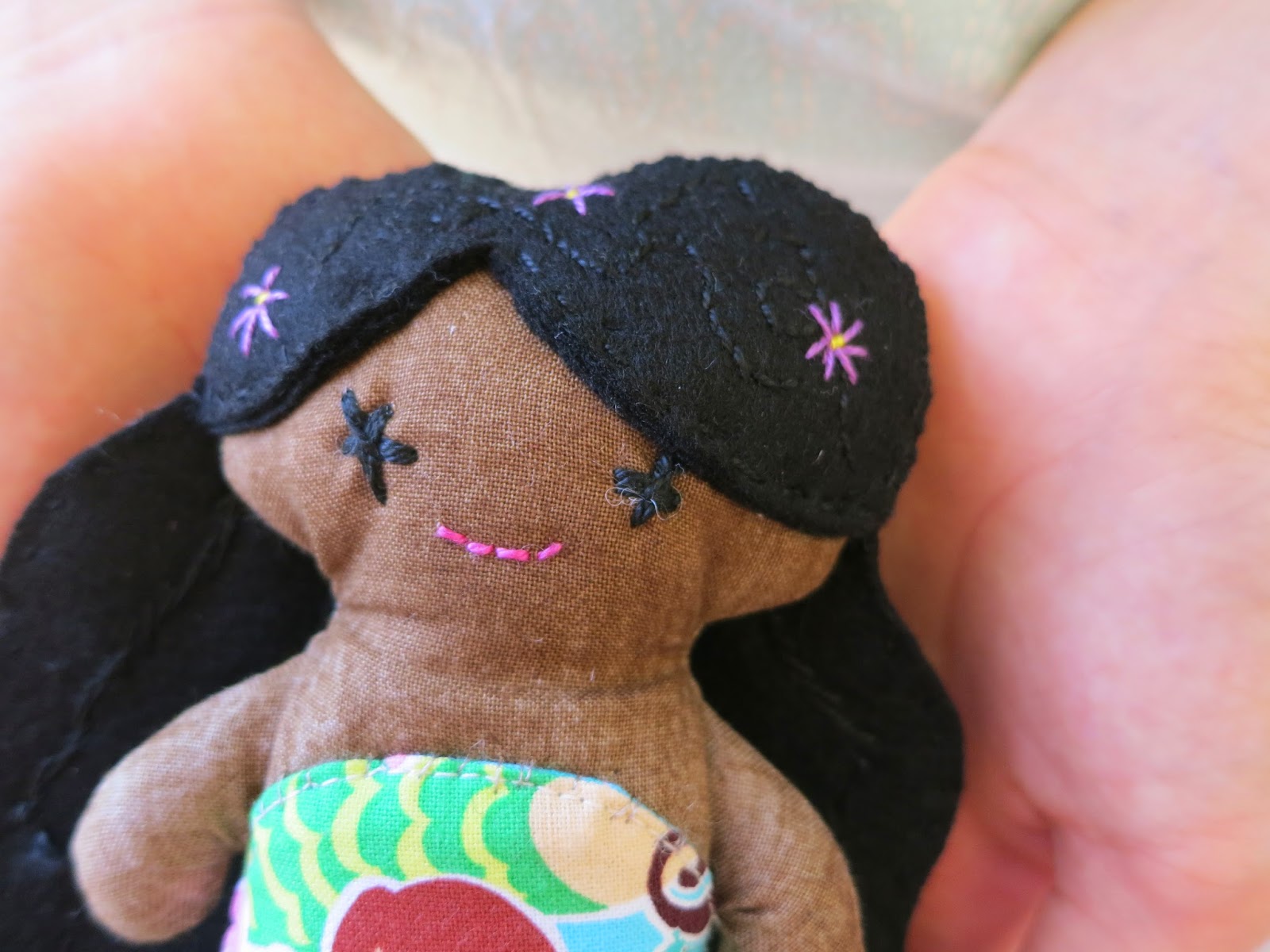 I hope your weekend has been a good one - we've had lots of rain here, which has been perfect for having the cricket on in the background while pottering about doing other things (or actually watching the cricket while catching up on some reading, like my husband has been doing).  We're gearing up for a family game of 'Stitchopoly' (exactly the same as Monopoly but created by DMC with a sewing-theme) this afternoon, most likely with a glass of wine and some chips.  Enjoy the rest of your weekend.   xoxo cat
Posted by cat and vee xoxo at Sunday, December 28, 2014