Following on from yesterday's QuiltCon post, I'm back today to share more quilts + their stories with you.  I made sure to take photos of all the information cards next to each quilt, so I could record not only who had made the quilt, but also the inspiration and story behind it.  I know there are a couple of quilts where I forgot to take a photo of the information card, so I'll try to fill in as best I can!

First up today we have not one but two amazing quilts by Luke Haynes, who is an individual MQG member from Los Angeles.

“[The American Context #68] Double Elvis” is an original design and was shown in the Applique category.  In Luke’s words, “[t]his piece wants to talk about the collision between pop art and traditional art.  The posture the figures are in reference the ‘double Elvis’ painting by Andy Warhol.  Yet the people aren’t famous, so the postures reference pop-art but the subject upon deeper reflection is an everyday person.  The person doesn’t matter, it’s the method and design that is called to attention”. 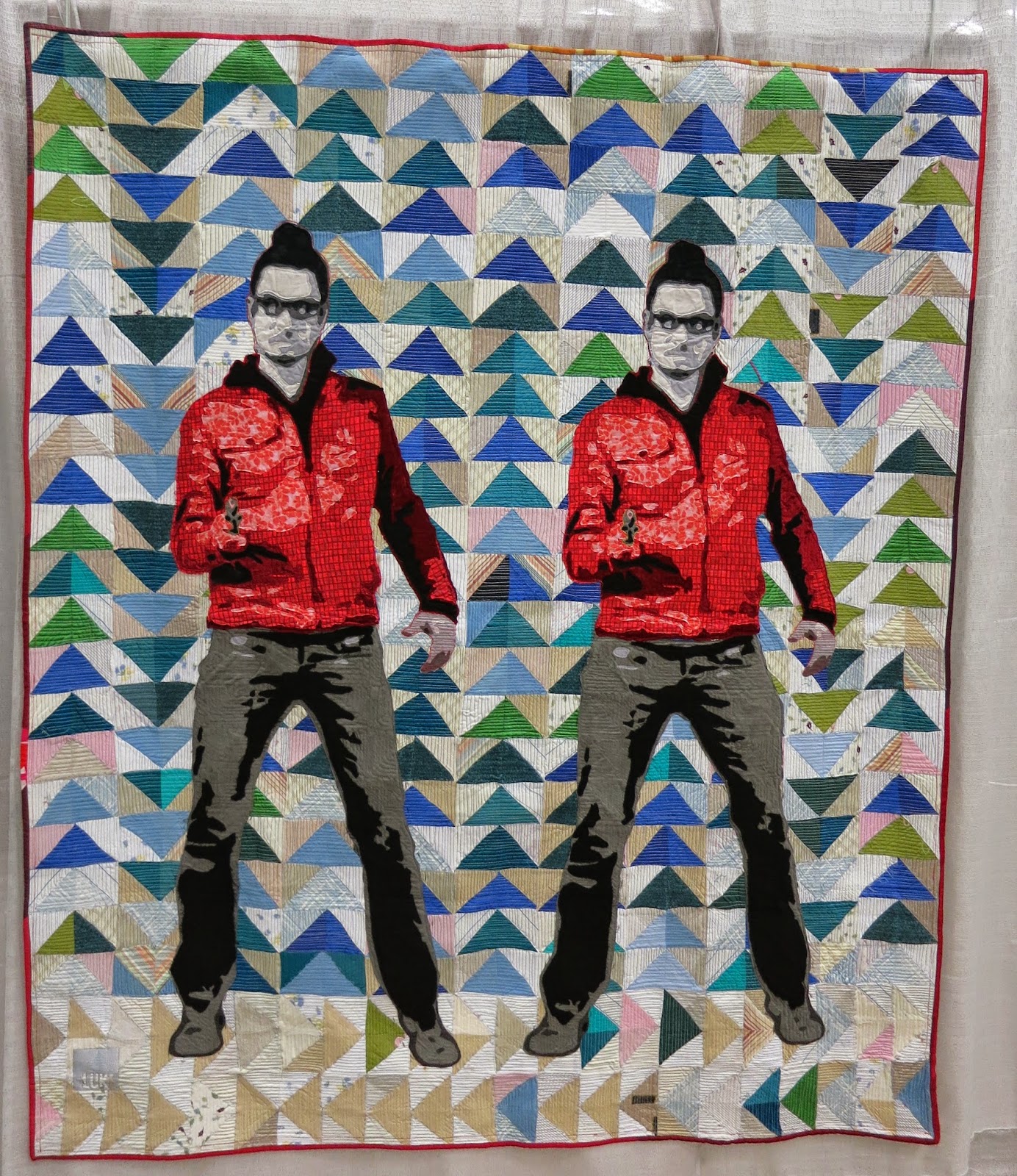 There is so much texture and detail in this quilt, so I took a few pics to try and capture it. 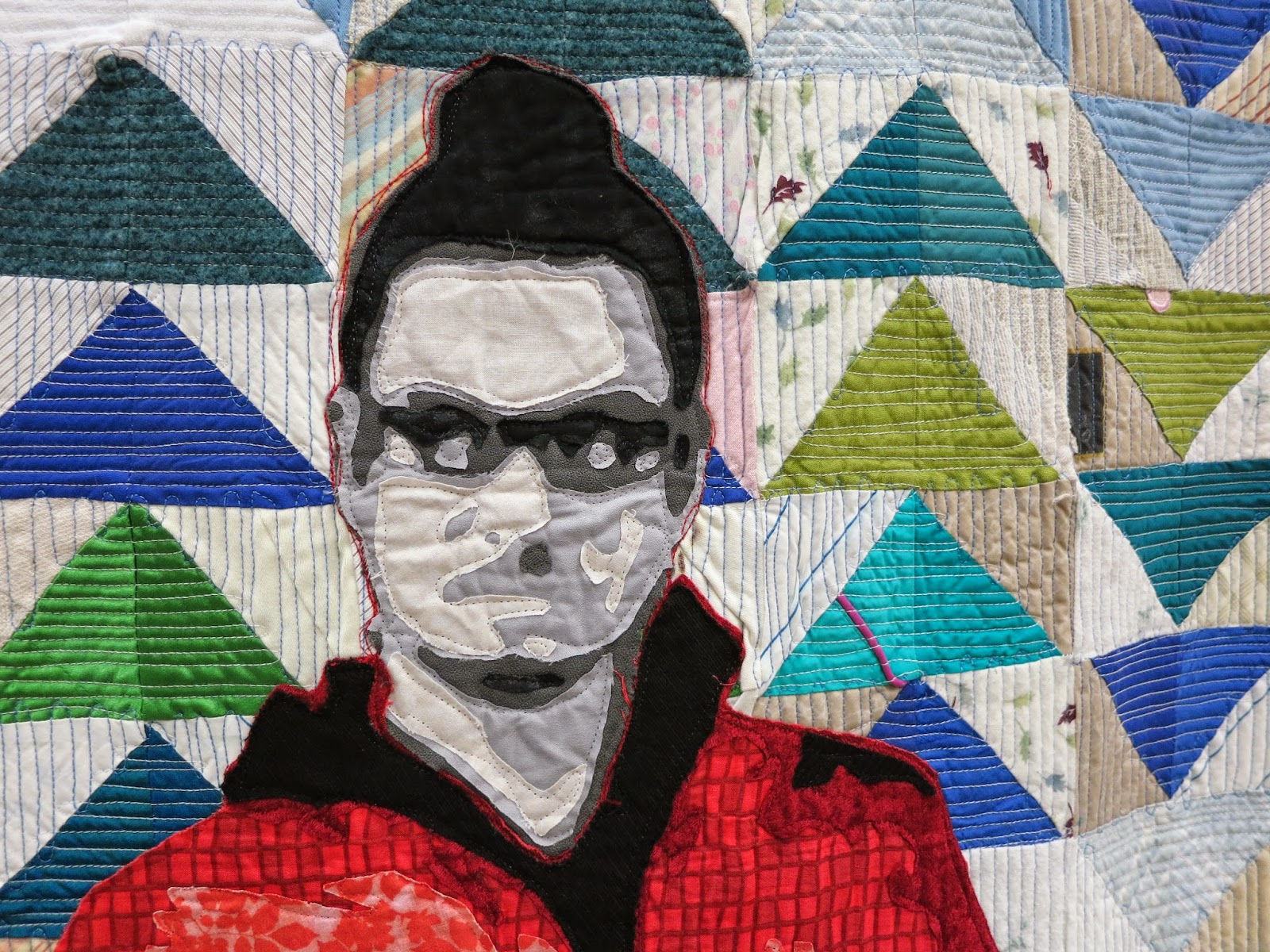 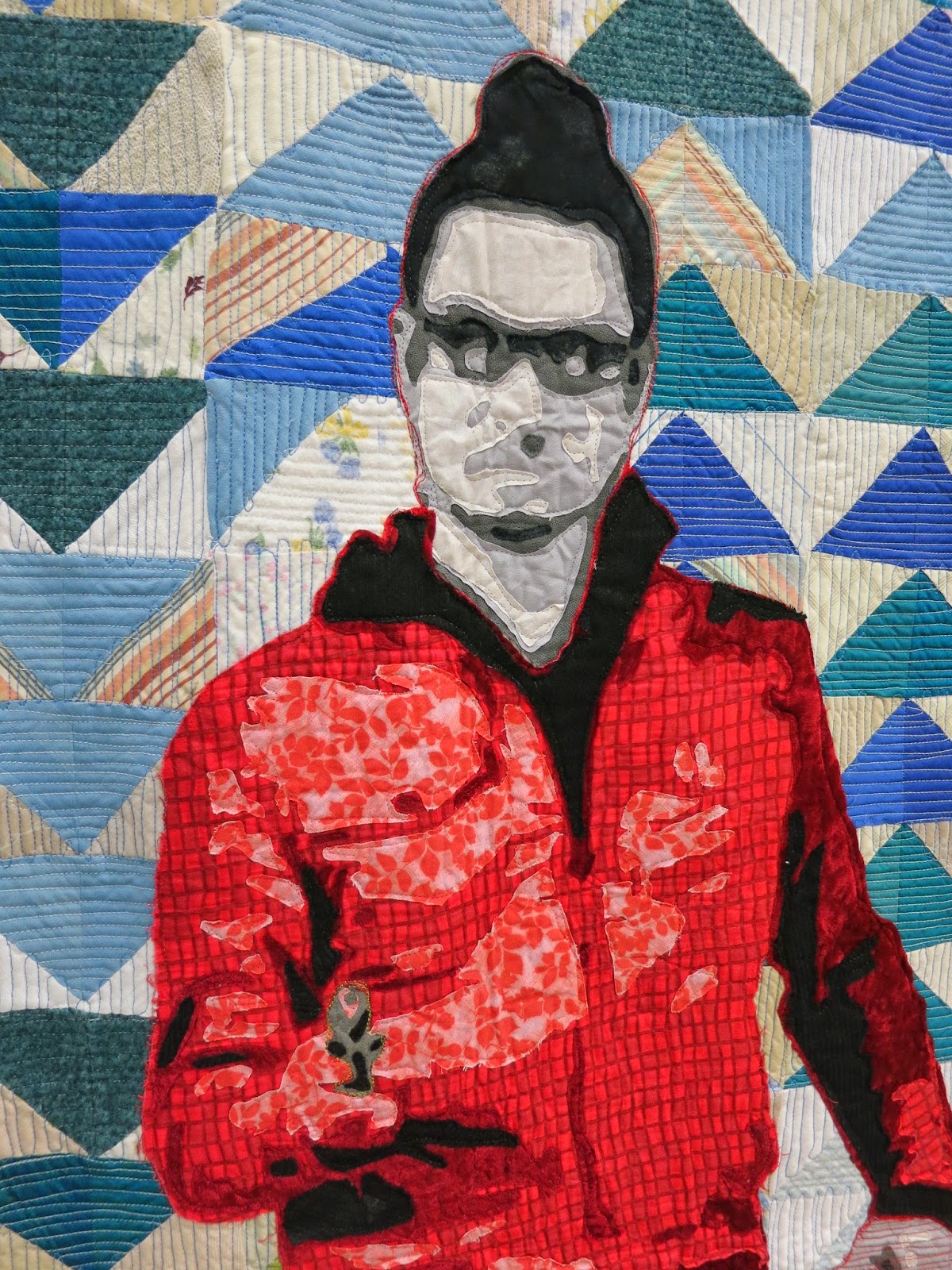 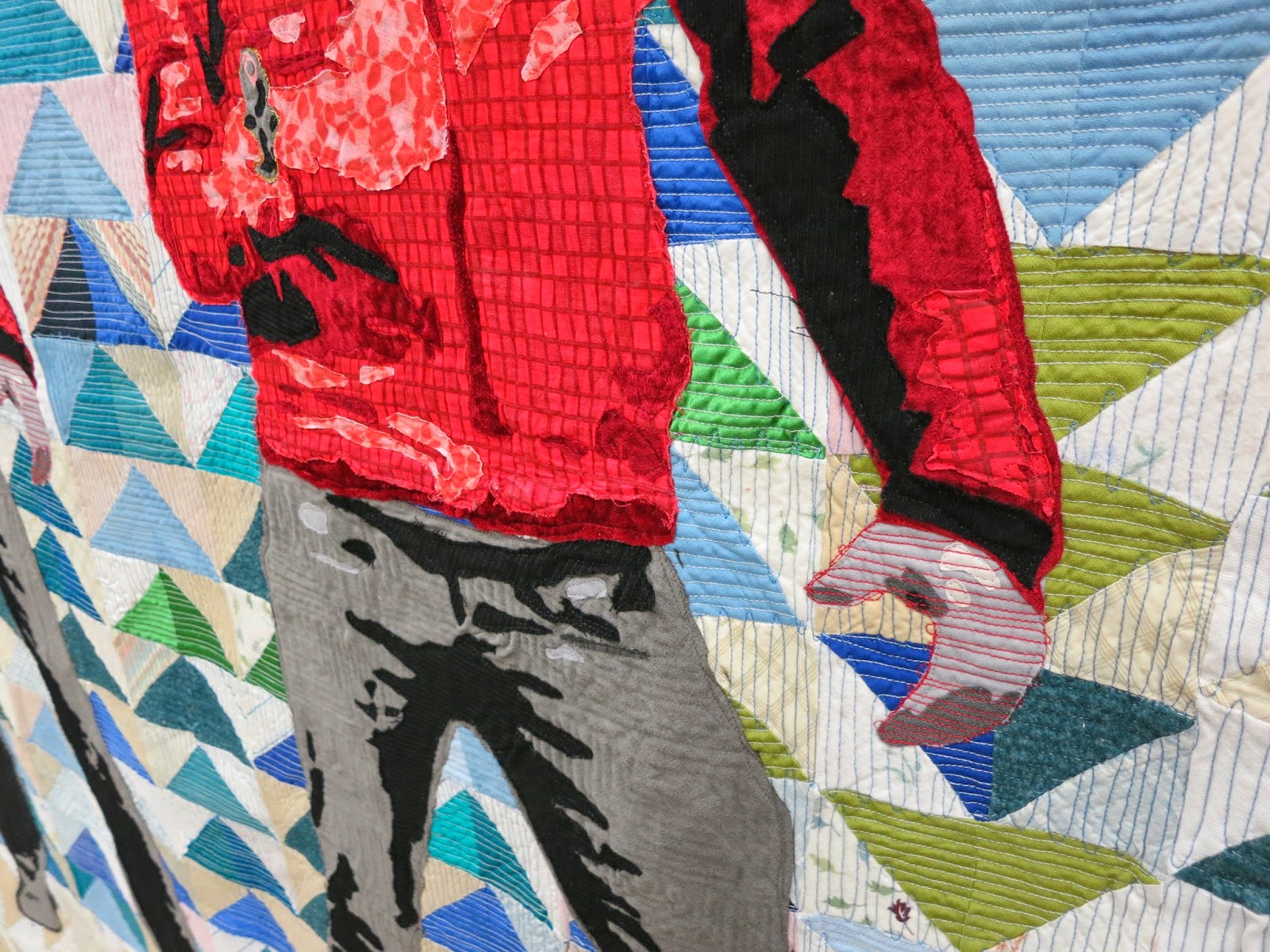 This next quilt is again by Luke Haynes, and was also shown in the Applique category.  It is “[The American Context #16] Christina’s World” and is based on "Christina's World", a painting by Andrew Wyeth currently on display at the Museum of Modern Art in New York City.

In Luke's words “Andrew Wyeth painted his neighbour Christina Olsen after seeing her drag herself home through the field.  This painting speaks to the concept of relative distance and what we take for granted.  This works well in concert with the themes of this series where I am doing my best to change the pre-conceptions of functional objects and challenge the paradigms of ‘Craft’.  This quilt follows the lights and darks of the painting, giving a dialog between the traditional motif in the quilting and the visual motif in the painting”. 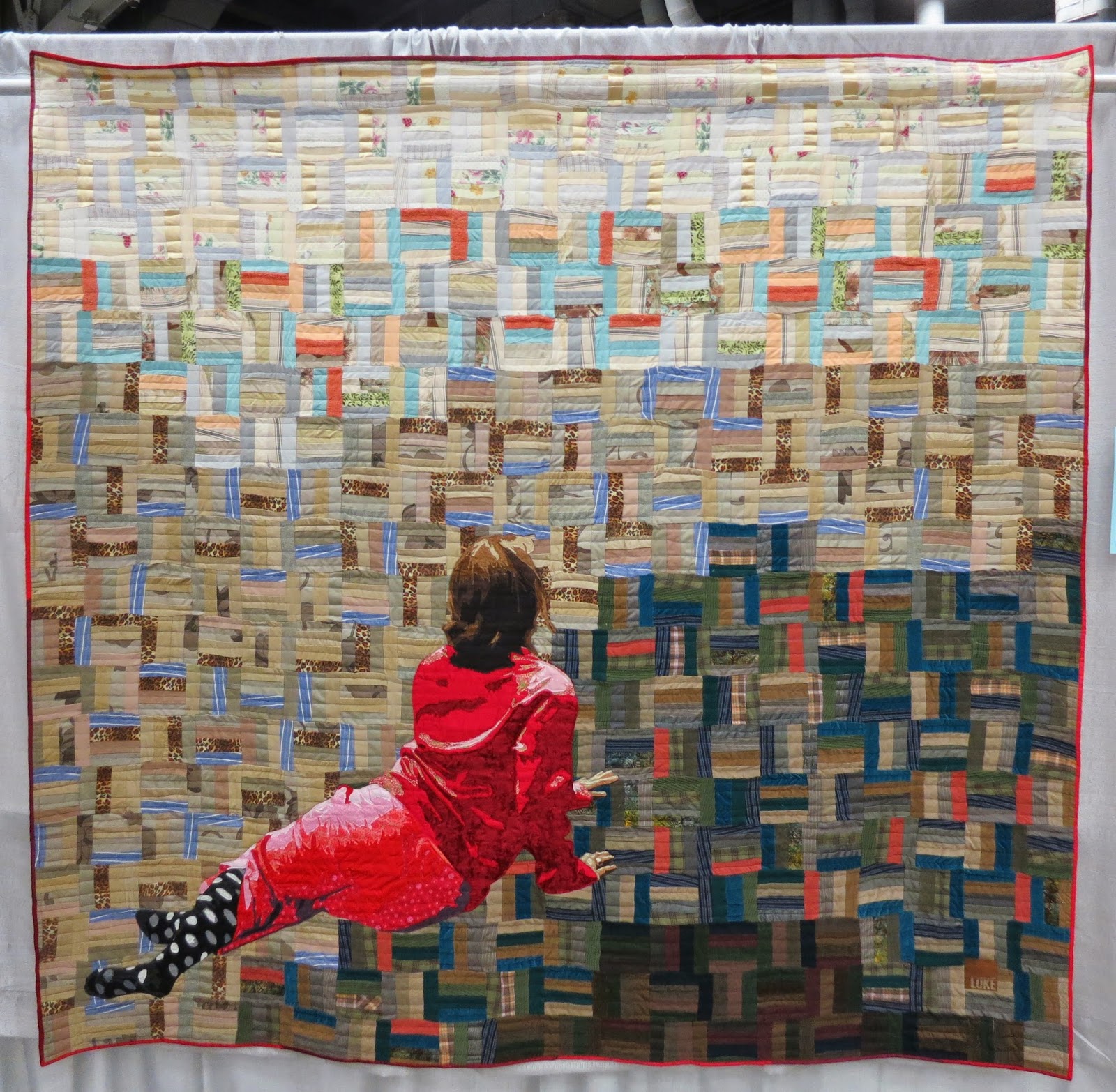 Again, there is extraordinary detail and texture in this quilt, and it was quite amazing to see it close up.  I really wish I had seen the Andrew Wyeth painting at MoMA when we were there a couple of years ago! 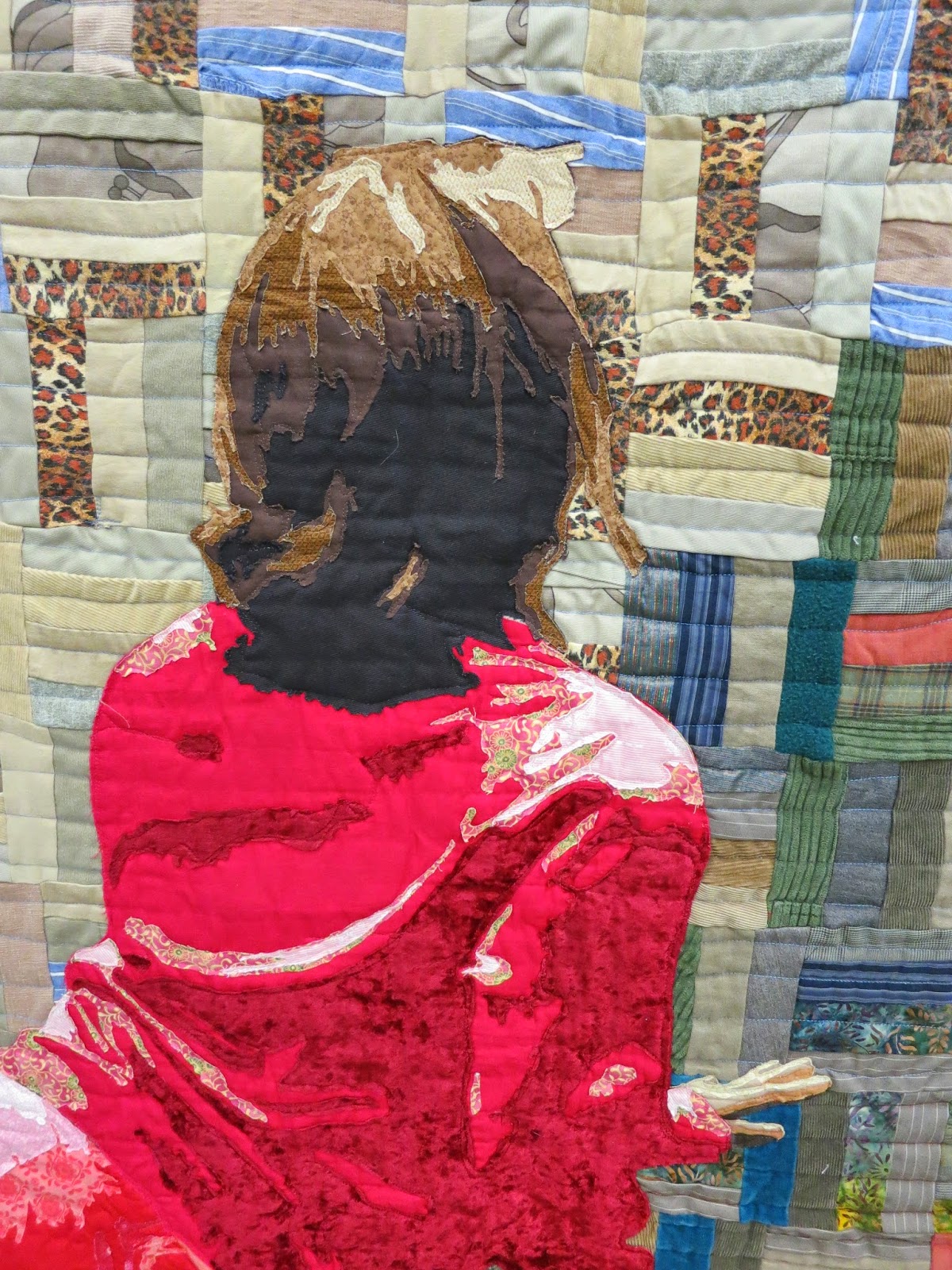 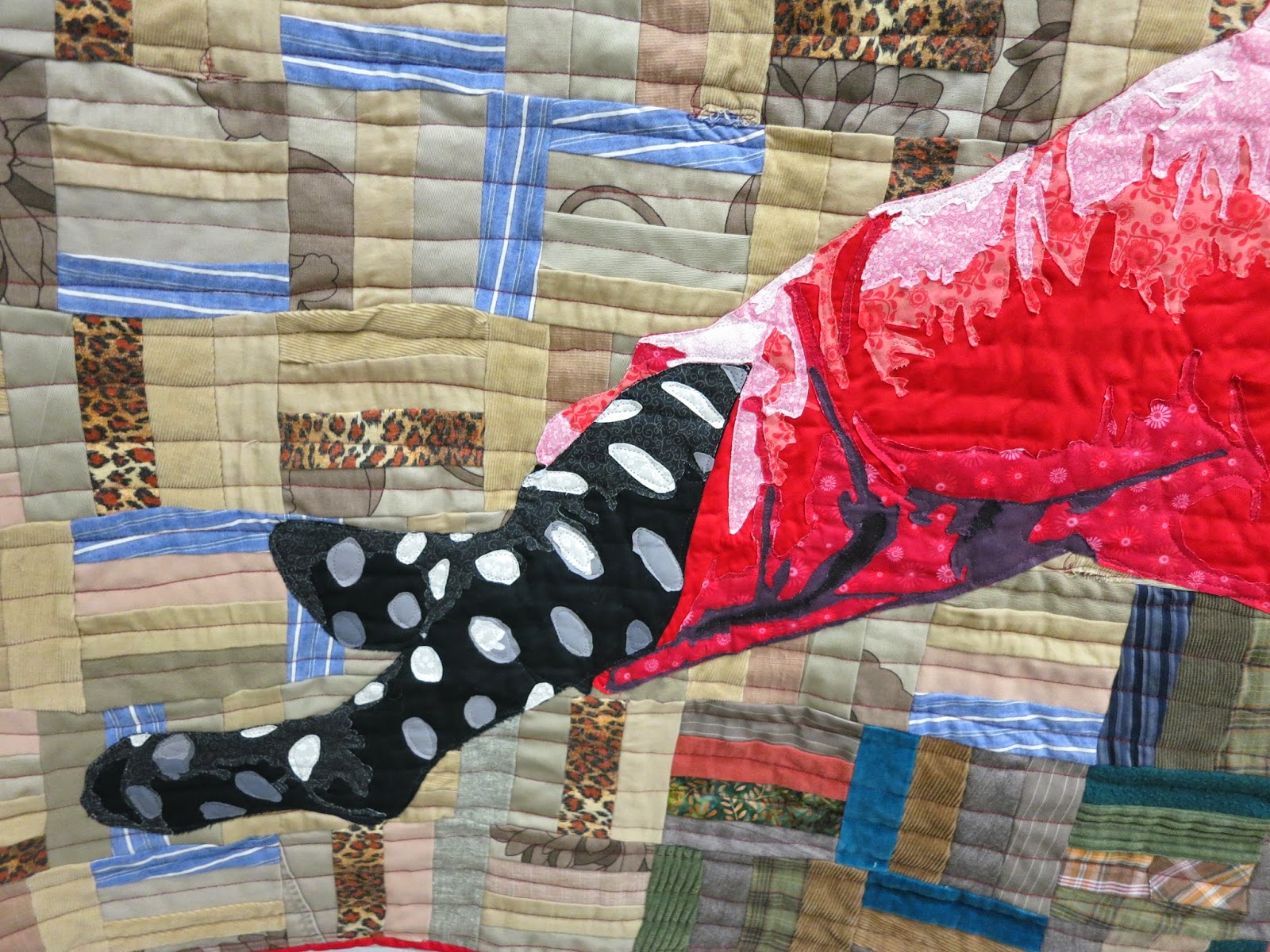 I'm not sure if Luke always includes his name within his quilts - I noticed it in 'Christina's World' and took a pic, but forgot to go back to look at 'Double Elvis'. In peering at my pics above though, I've found 'Luke' in the bottom left corner of 'Double Elvis'.  I need to go look up Luke online to read about whether he does always include his name - I'm guessing yes, since it's such an awesome little addition to his amazing quilts. 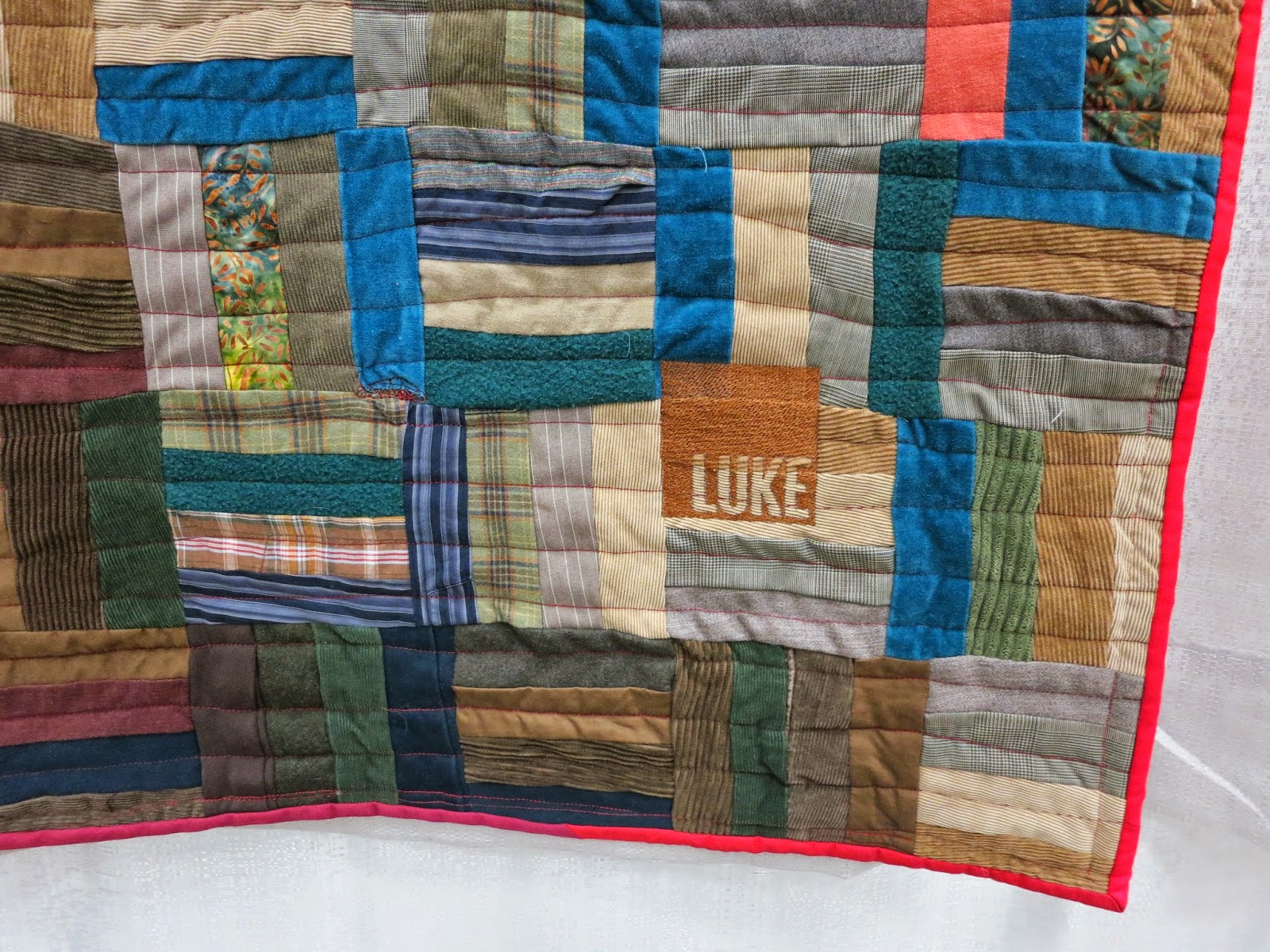 This next quilt is very powerful and I remember watching it develop on instagram.  It was very moving to see it in person.  “Self-Study #4: The One for T” is by Chawne Kimber, an individual MQG member from Pennsylvania.  In Chawne’s words “[c]laiming stand-your-ground rights, George Zimmerman shot and killed unarmed teenager, Trayvon Martin in Sanford, Florida in February 2012.  In the aftermath of the killing, the hoodie became the icon for the outrage.  Is a hoodie just a symbol of a hoodlum, whose only fate should be early death?  This quilt is a collage of self-portraits in a hoodie rendered in appliqué using a street art style; it is a tribute to young Trayvon who needn’t have died that night”.  It is a mix of machine applique, machine quilting, raw edge reverse applique and raw edge applique. 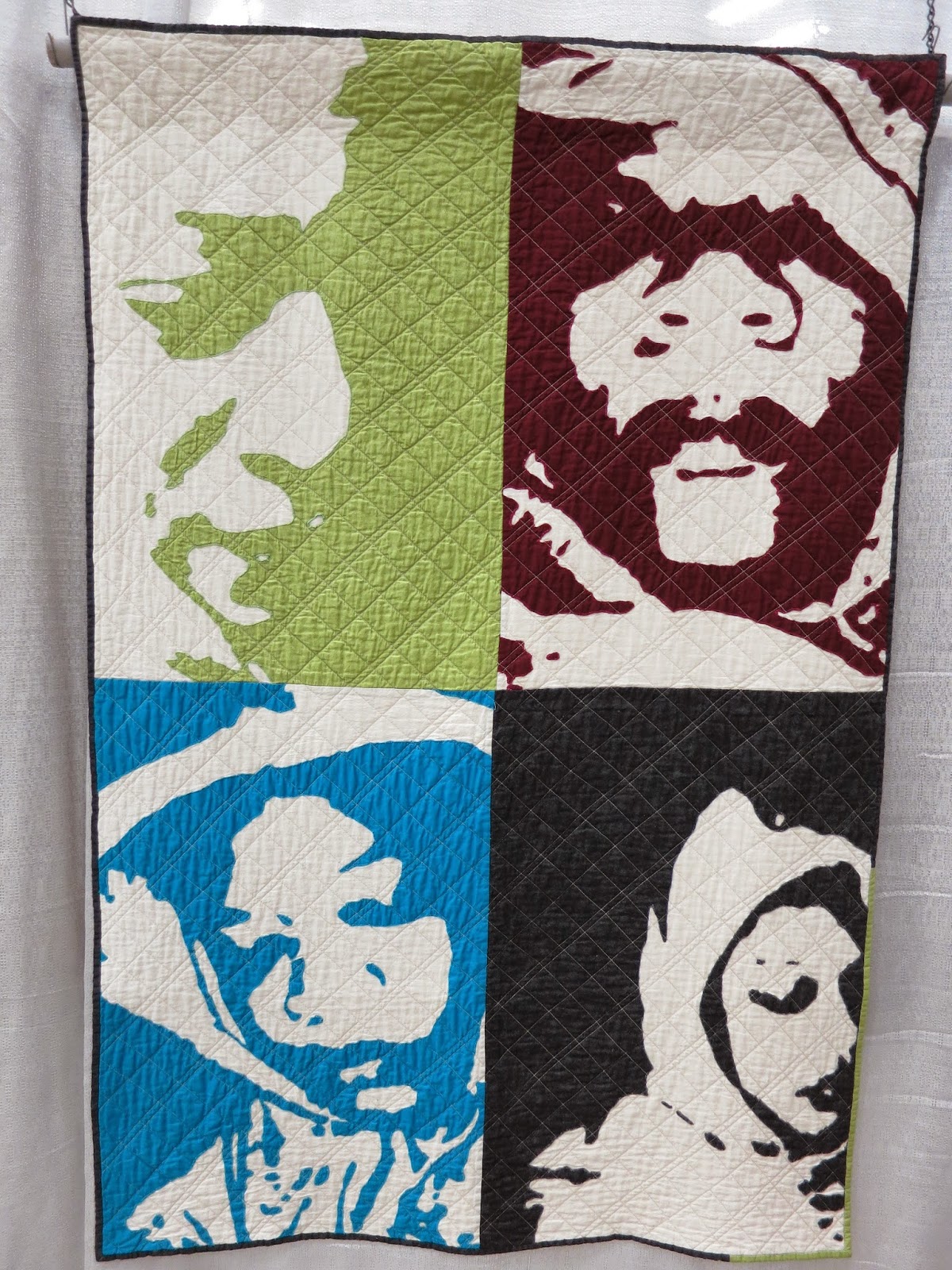 We were on holiday in the US around Easter 2012, and I remember the media being full of stories about Trayvon Martin.  I had never heard of the "stand your ground" defence before - I guess it's similar to "self-defence" over here, but with a huge and significant point of departure being the different gun laws between Florida and here (I believe Florida is a concealed-carry state).  This quilt is such a gentle and moving tribute to a young boy who died way too soon. 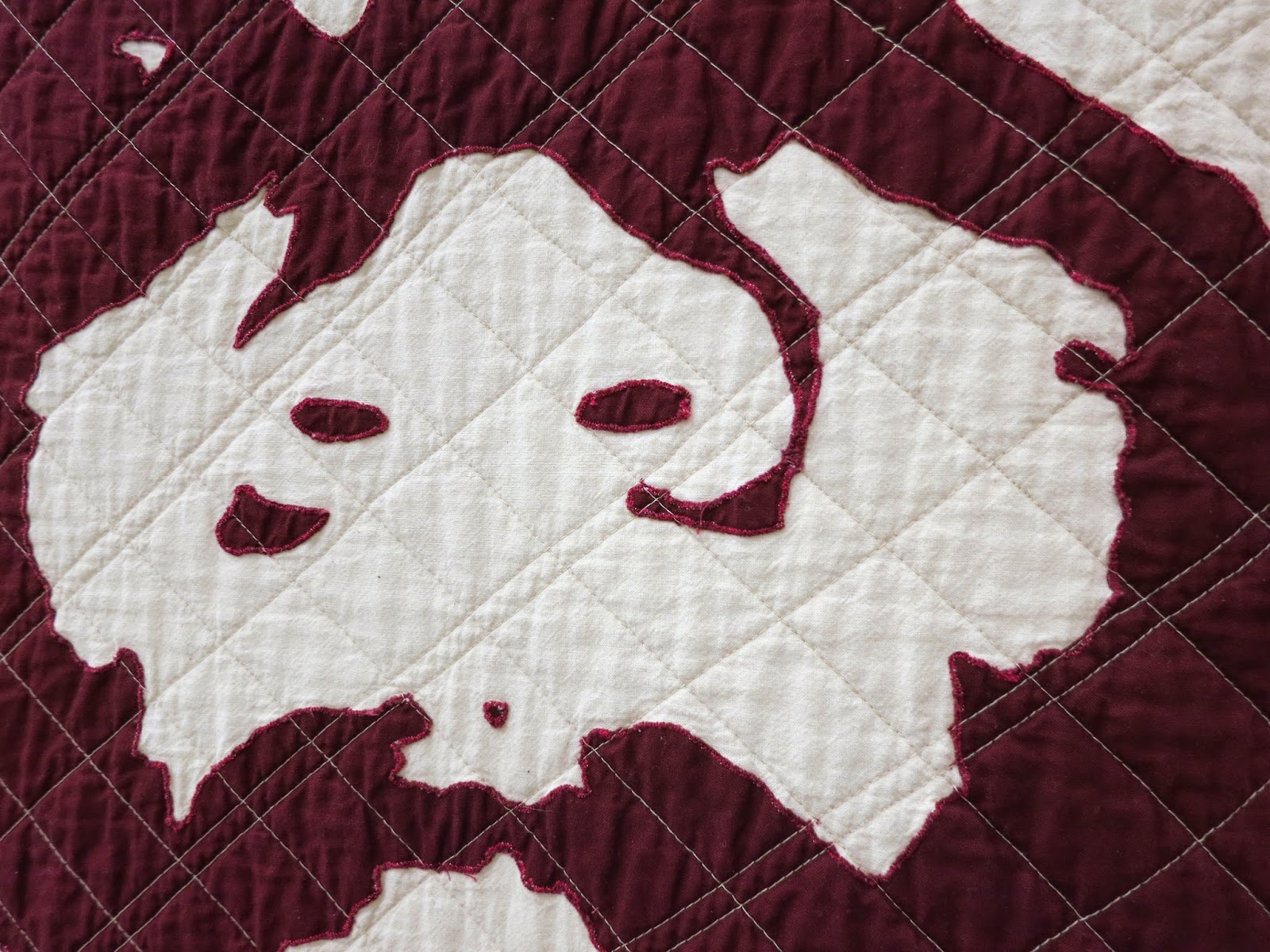 Here is another quilt by the amazingly talented Chawne Kimber.   "In Anniston" was shown in the Improvisation category and is the first in a series of log cabin quilts designed to represent places of importance to Chawne.  Chawne has used her own hand-dyed indigoes in this quilt, which represents her grandmother's house in Alabama. Chawne goes on to say "“[t]here was something primal about the improvisation within the traditional construction. A pristine, manicured centre that became free-ranging, ramshackle patchwork with personality … and dare I say, soul.  The quilt is not squared, an intentional artistic choice to let the work retain its personality rather than being fully forced to bend to the will of the external society”. 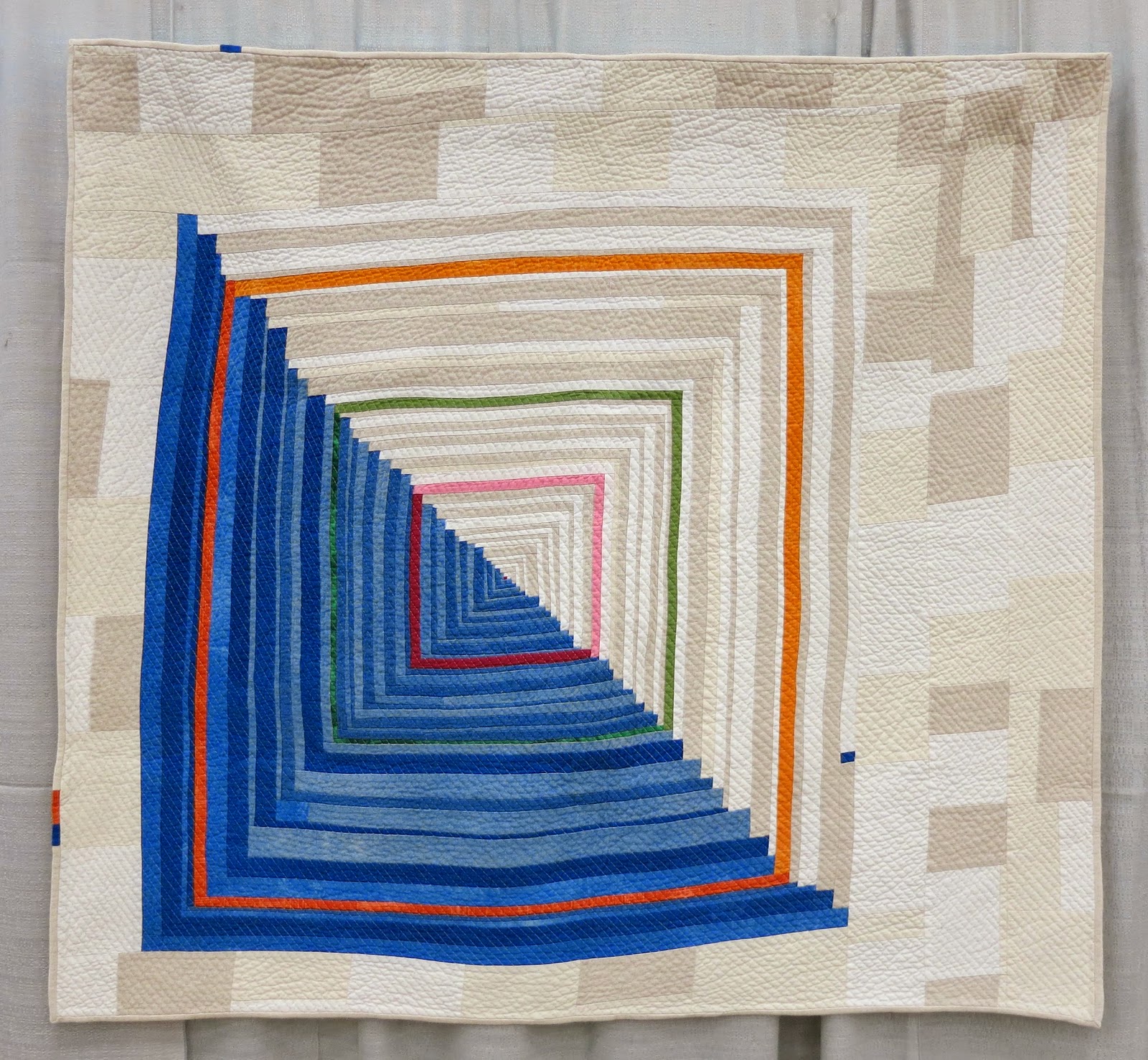 The red square in the centre of the quilt is TINY - smaller than your little fingernail.  I loved this quilt - the colours and fabric placement are really lovely. 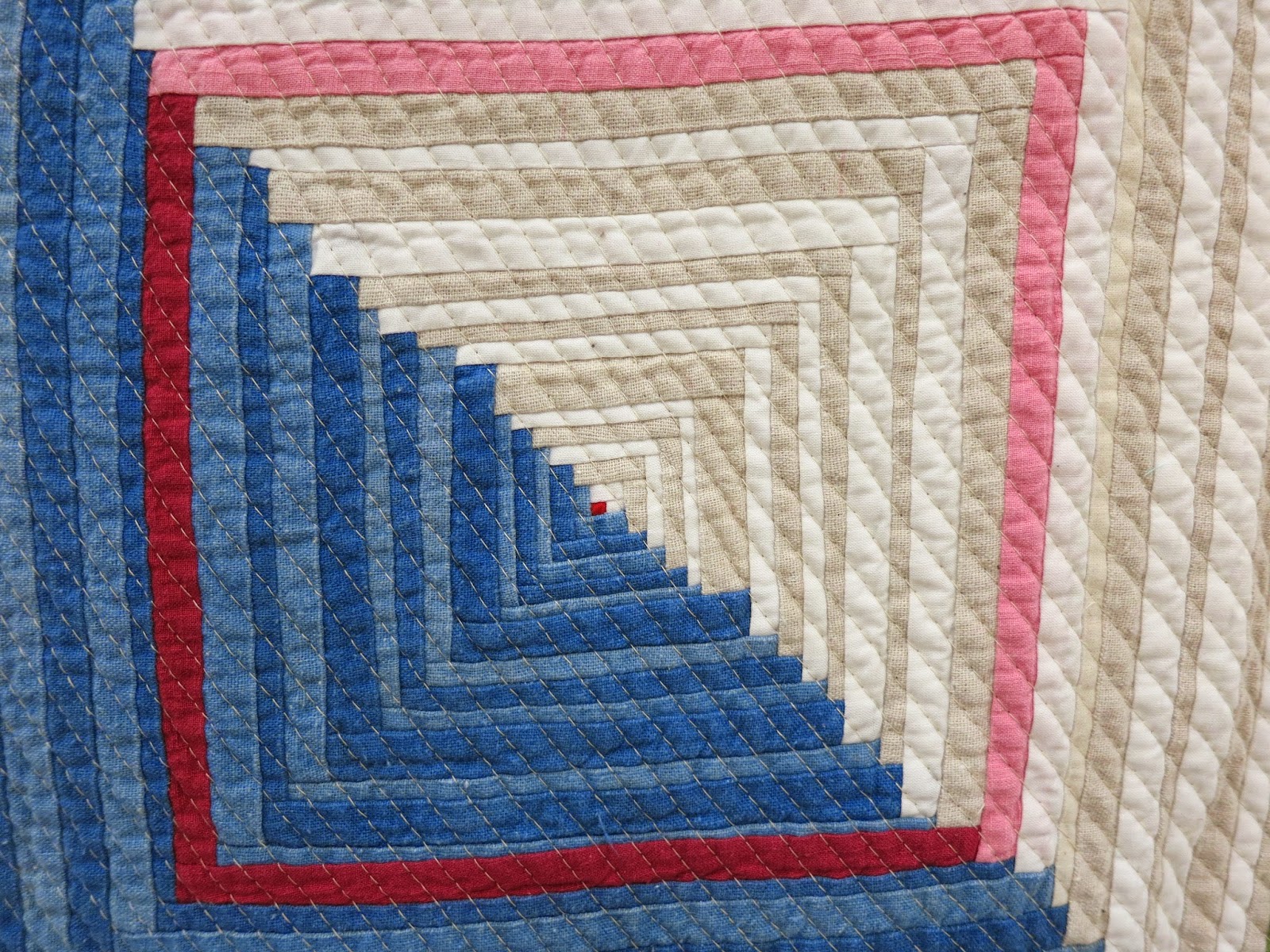 “Untitled (Improv Half-Log Cabin)” is by Heather Jones of Cincinnati MQG, in the Improvisation category.  In Heather’s words “[t]his is one of my all-time favourite quilts, the design for it was inspired by the work of the Gee’s Bend quilters.  I used a limited colour palette consisting of natural and dark navy blue cottons, combined with a coral coloured linen and cotton blend in the square of each block.  Each of the large four half-log cabin squares was made improvisationally.  I love the spontaneity that it gives to the finished design”.  Heather quilted the quilt on her long arm machine in a free-hand organic figure-eight design. 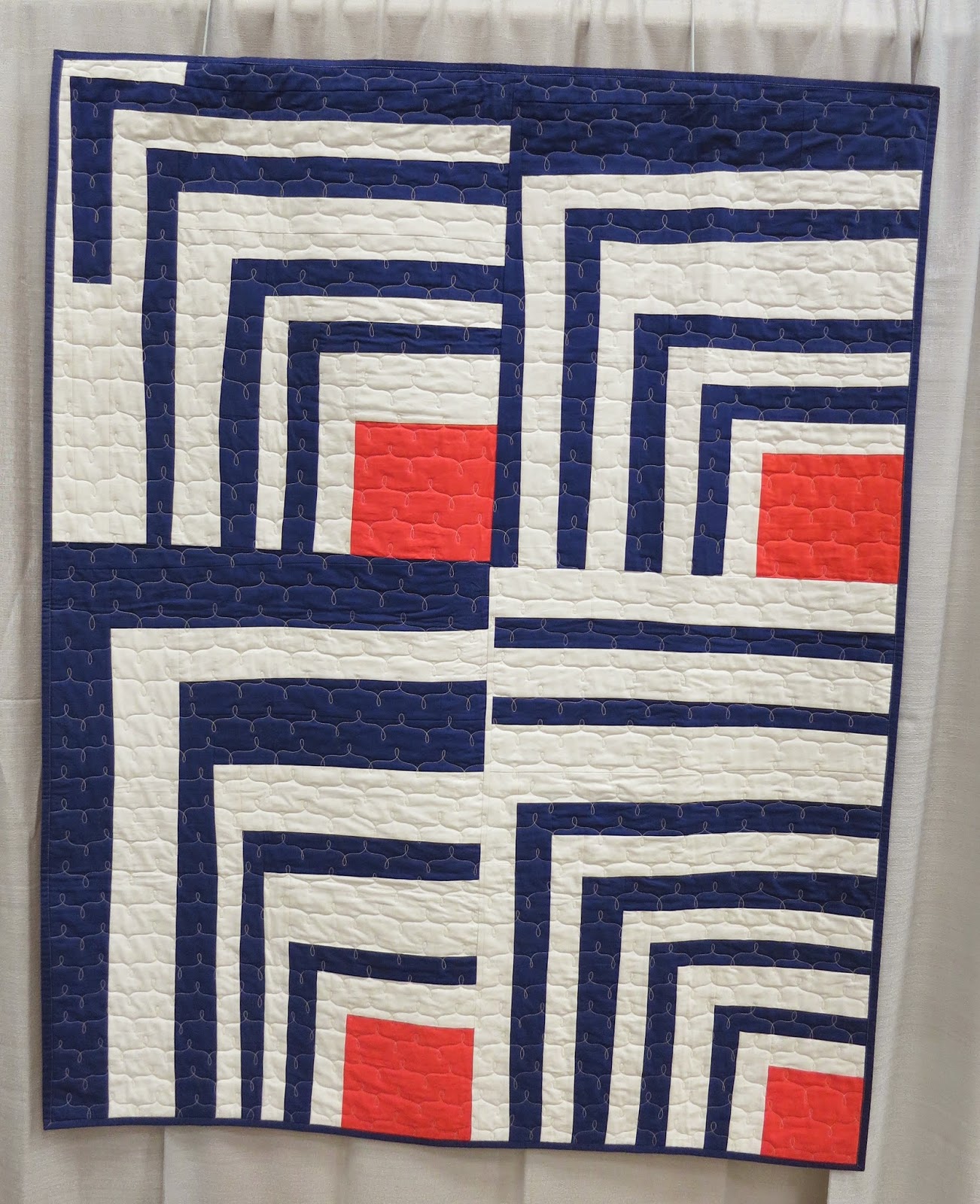 I met Heather - whose work is amazing - briefly in the vendor hall and she was very lovely and said she was very much looking forward to taking a class with the quilters of Gee's Bend over the weekend.  I really love Heather's quilt - the colours, improv half-log cabins and quilting all combine to create something really effective. 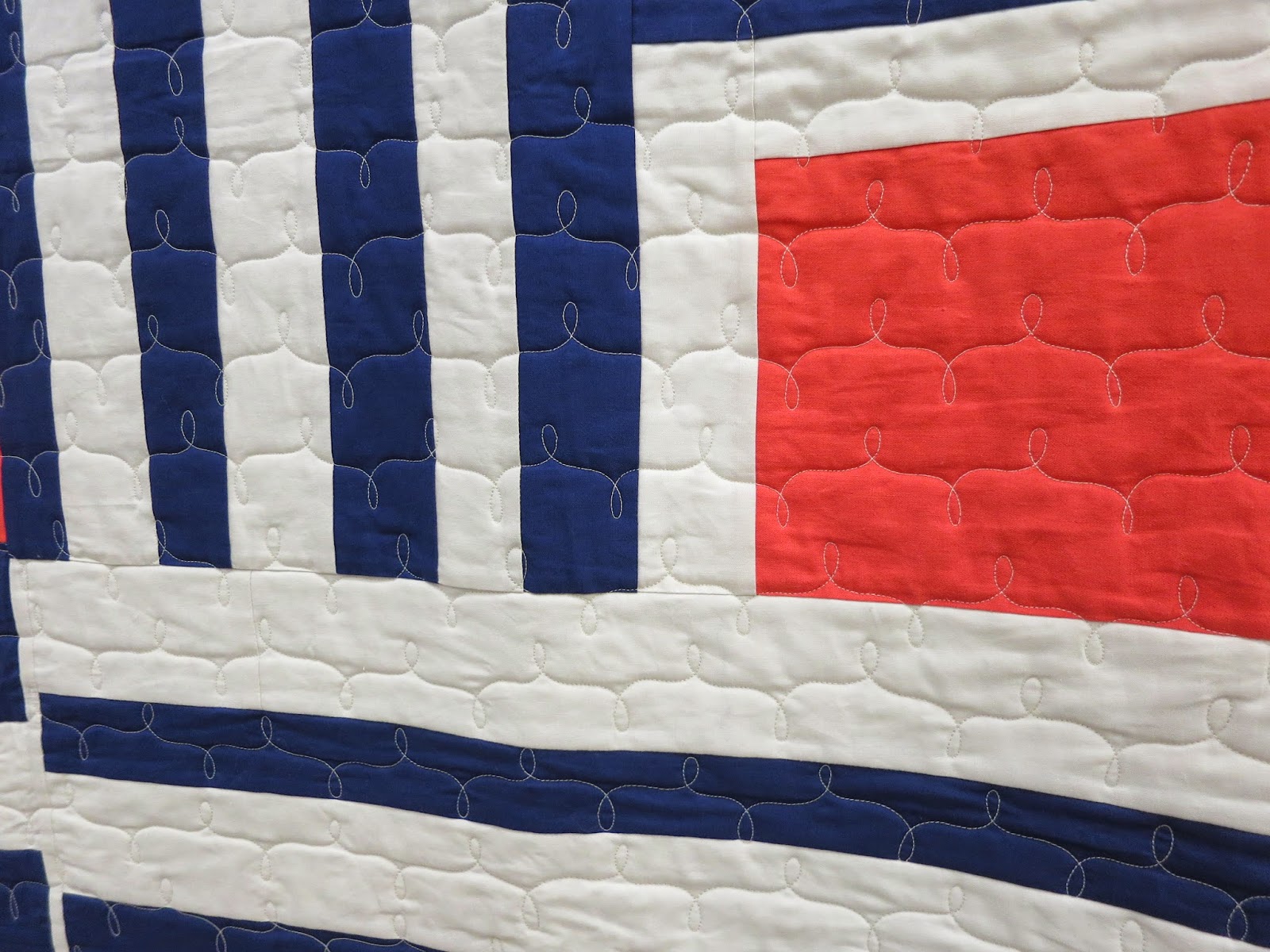 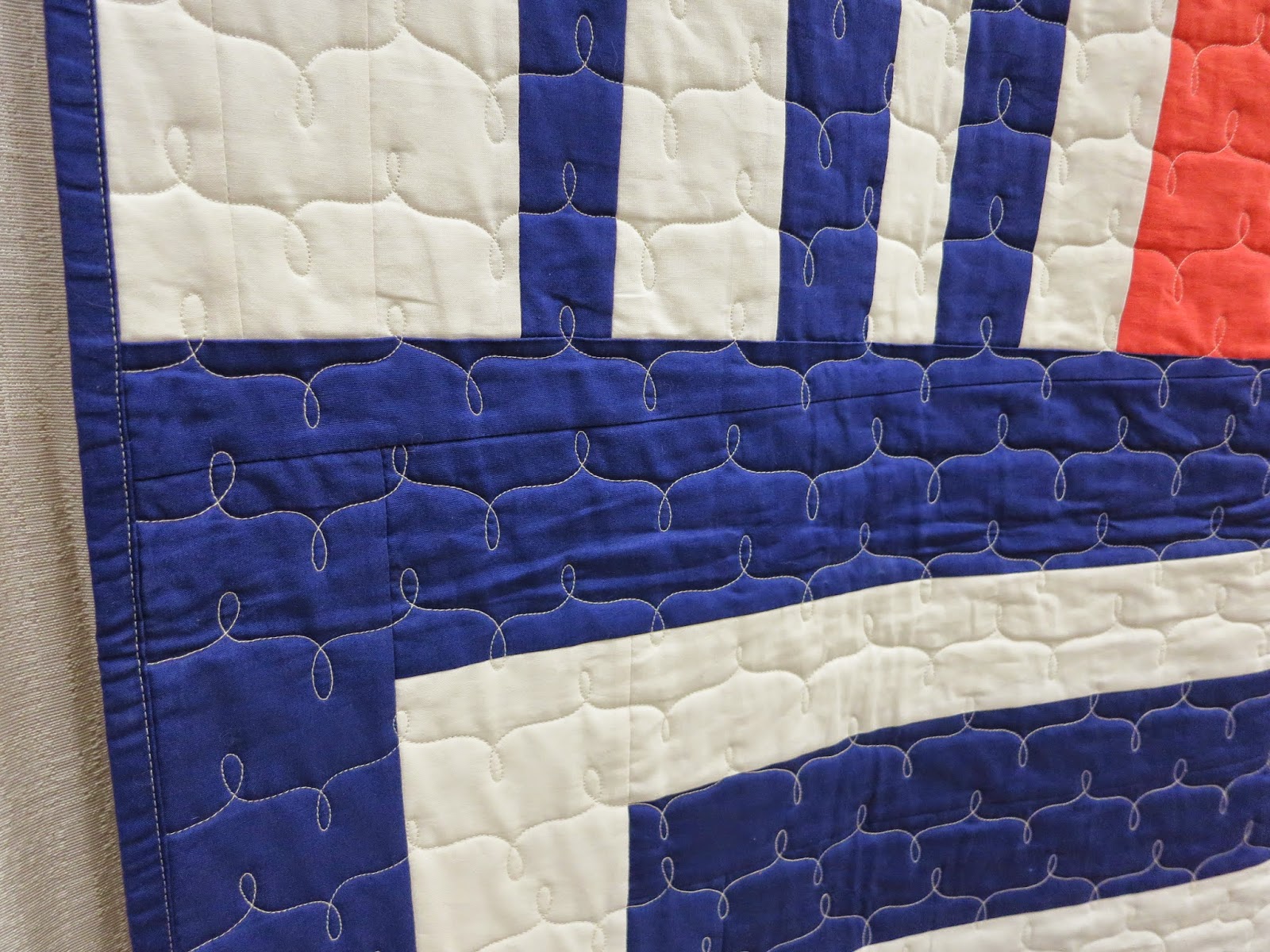 This next one is one of Vee's favourites! - “Sam and Suzy” is by Megan Callahan of Portland MQG and was quilted by Elizabeth Hartman and shown in the Piecing category.  This quilt was inspired by the Wes Anderson movie ‘Moonrise Kingdom’ (I saw it and loved it!) and in Megan's words, the “resurgence of vintage plaids.  Sam and Suzy features one inch square pixelated piecing for the central images.  The background is made up or a larger pieced plaid in ‘Moonrise Kingdom’ inspired colours, mimicking a solid plaid background fabric”. 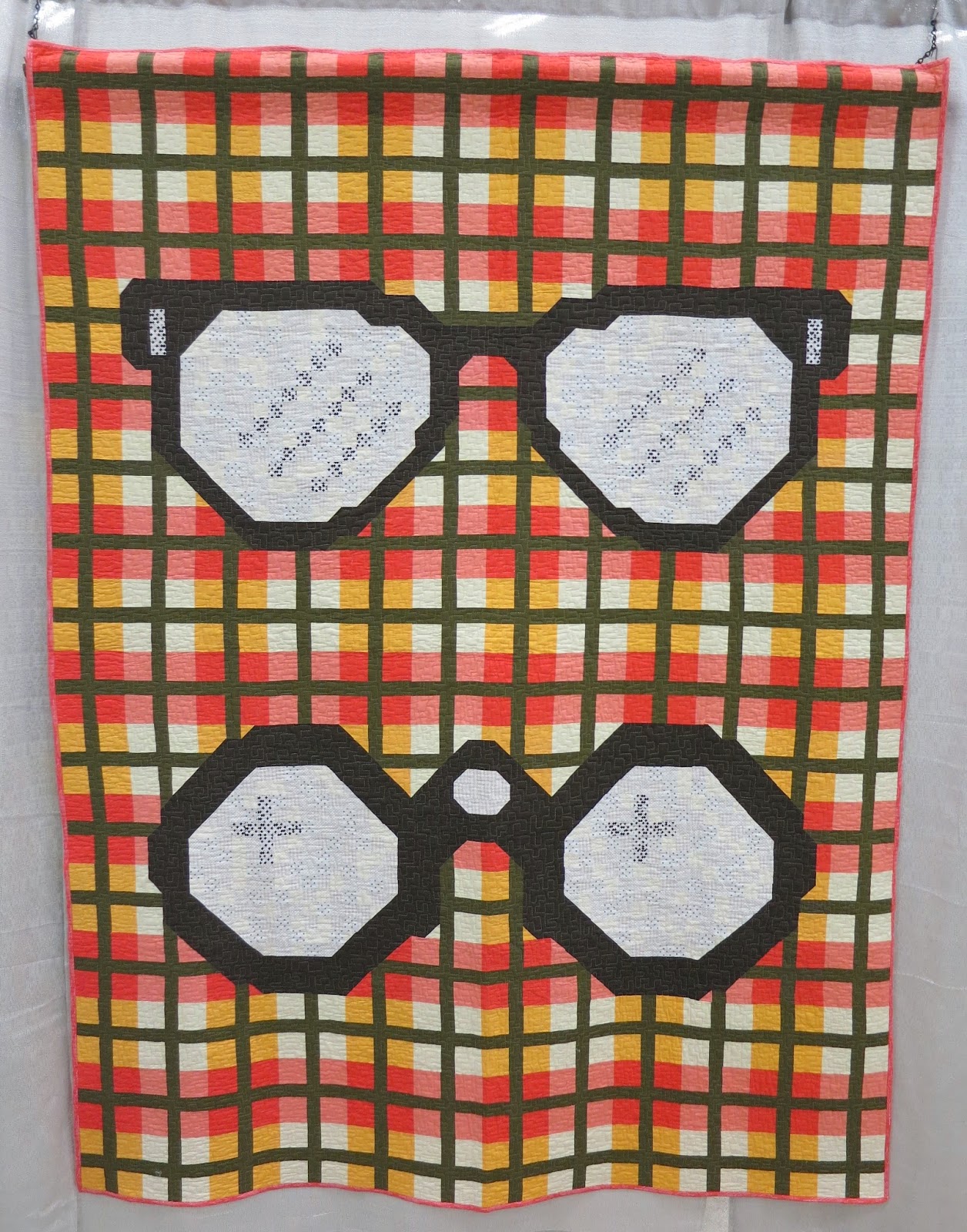 The last quilt for today (and oh goodness, there will be another quilt-post tomorrow!) is 'Citrus Wedge' by Jen Carlton Bailly of Portland MQG in Oregon.  This one was shown in the Handwork category, and features Jen's original design and a mix of machine and hand-quilting.  "Made from my friends' stashes", this is a quilt made "just for me", with "my favourite colours and a yearning for sunshine in the dark winter months of the Pacific North West". 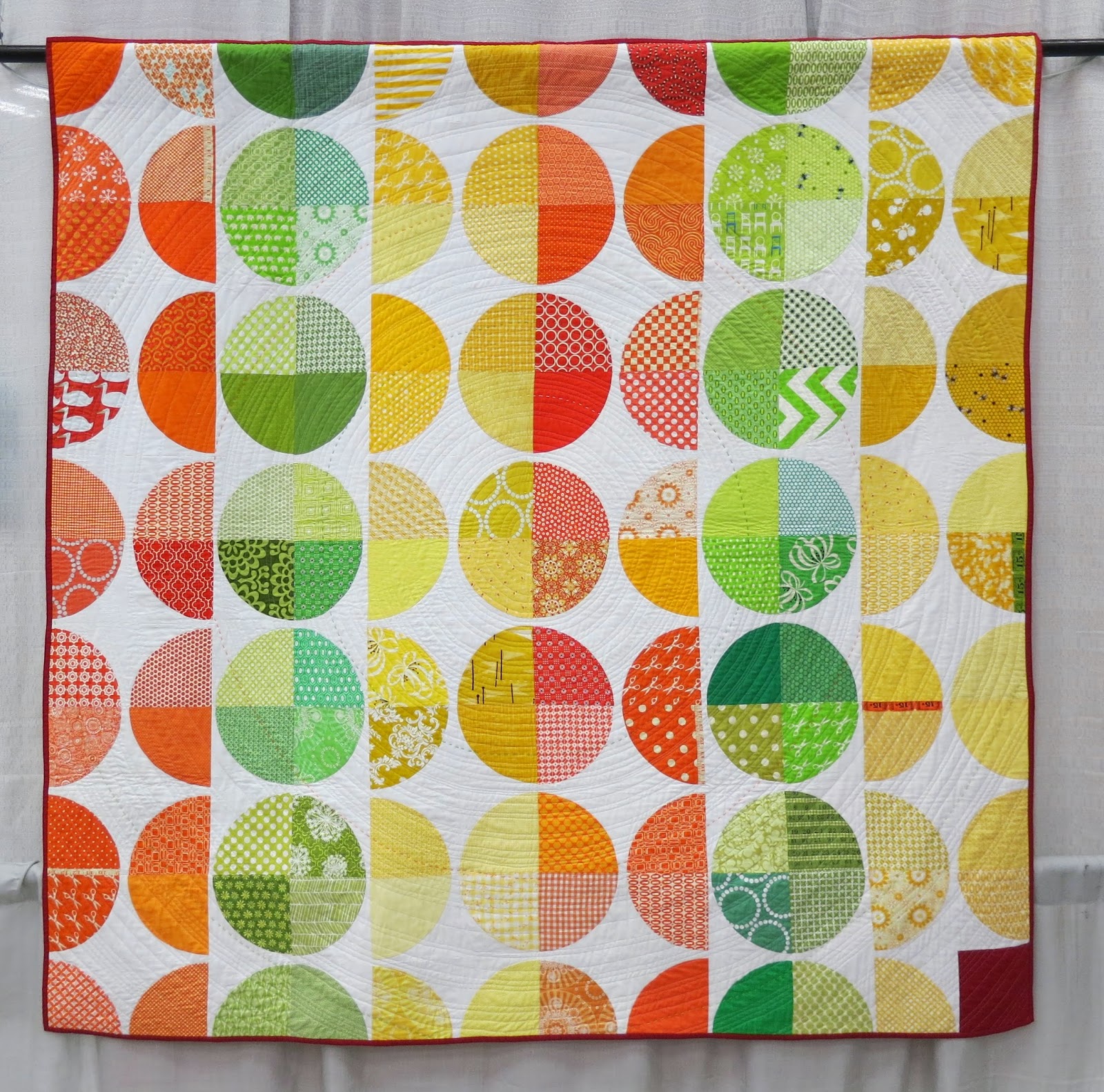 I've seen this quilt online - maybe on Jen's blog or instagram? - and in person it's just so vibrant and happy.  The colours are gorgeous and I love the added interest provided by the hand-quilting, which I'd not noticed in online photos before.  I was hoping to meet Jen at QuiltCon, but she did not attend.  Jen's been enormously kind, supportive and helpful to so many of us in her former MQG role, which she only stepped down from recently. 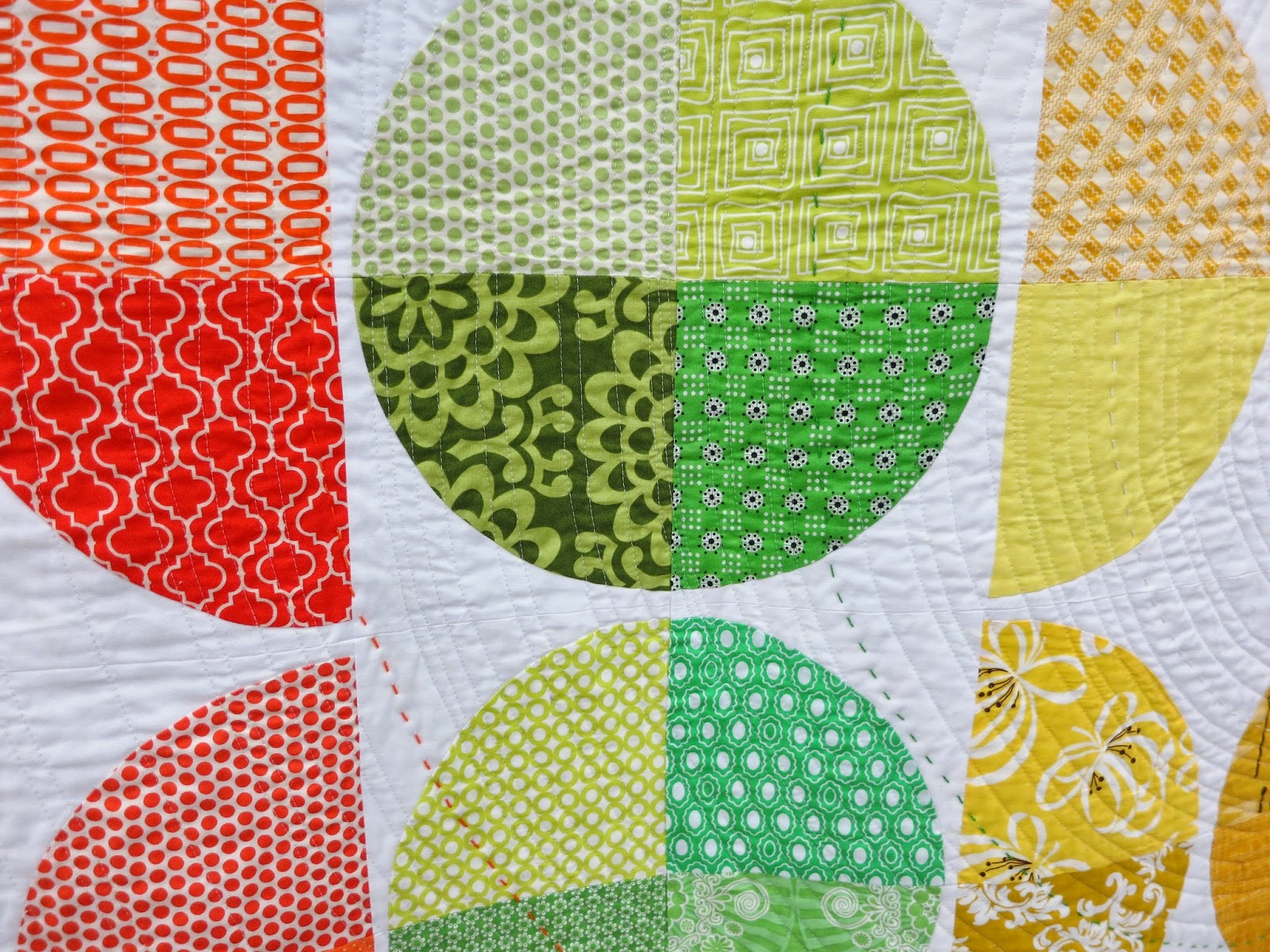 Oh my gosh, I still have so many quilt-photos to share, but figure that's enough for one post!  I'll keep typing and uploading and be back tomorrow with more.  xoxo cat