OK so the dodgy night-time-no-flash pics don't do it justice, but look at what arrived in the mail today:

Let's take a closer look at those 'staxx' bookshelves:

And ahhm yes, I am also loving 'washi-tape (sewing)' - the safety-pins in particular: 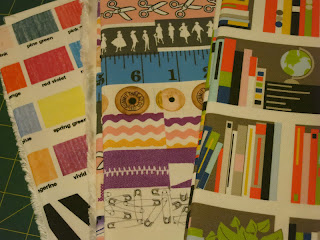 There will be sewing.    xoxo cat

Email ThisBlogThis!Share to TwitterShare to FacebookShare to Pinterest
Labels: fabric

Sometimes, the week goes a little pear-shaped and it's only Tuesday morning.

THIS time, it was all due to some action at the vet with Ted:

Vee and I got back on track today, with some more singsongs screen printing - a couple of different song colours will hit the shop by the end of the week.

Have been playing around with more of our singsongs words, mixing it in with the gorgeous Summersville fabric, and some Aunty Cookie:

And this wee cushion went to a wee Irish friend:

Here's to the week getting bigger and better in the run up to the weekend, yah!   xoxo cat

Making a start on some cushions for home, using Lucie Summers' gorgeous Summersville range for Moda.   Love it.  A lot.

Have framed 7 favourite prints in white, and am now slowly adding borders.  One down ... : 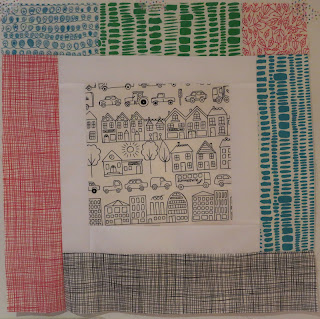 Happy weekend - fingers crossed for rain in Brisbane, since it's good weather for sewing ...   xoxo cat

In the interests of creating a bit of pressure to actually FINISH a quilt each for my children, I thought I'd post a couple of pics of where I'm up to ... two (only TWO!!) finished blocks each, and a few almost-finished blocks.  Not good.  At all.

The first is to be purple and green, with a little bit of light blue.  Here's what I've done so far: 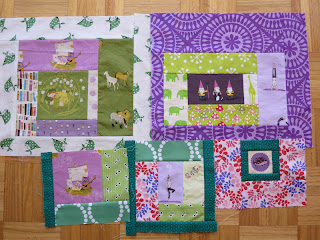 We're going with a randomly-sized log cabin design, which I figure I can square up later with a few solids.  Two finished blocks, and three started-blocks.  Not much light blue in evidence, though I see a bit of red and pink have crept in.  Very heavy on the Heather Ross designs I'm noticing too, and Lizzy House.

OK and here's the second - it's to be light blue and yellow, with a little bit of red: 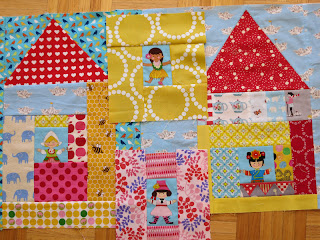 Each block in this one is to be a house - two finished so far - on the left and right.  And two kind-of-started-blocks.  There is to be an Alexander Henry little round-the-world person inside each house, so at least that's working so far.  And there's definitely a lot of yellow and red in evidence.  I need to bump up the light blue.

So. A bit of work to be done.  Hopefully they'll be finished before anyone graduates high school and leaves home.

Yep! That's me. Ms Bubbly!
I LOVE this illustration by aunty cookie
A gift to 'moi' from my kind friend Cat. 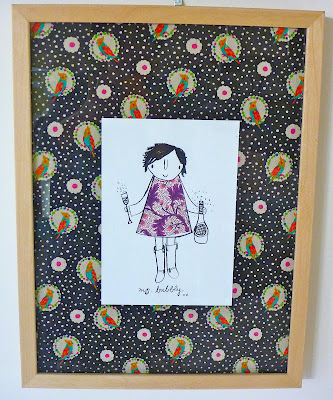 Cat, you will note too that I have repurposed one of my kitchen frames
and highlighted 'moi' with your New York fabric purchase. 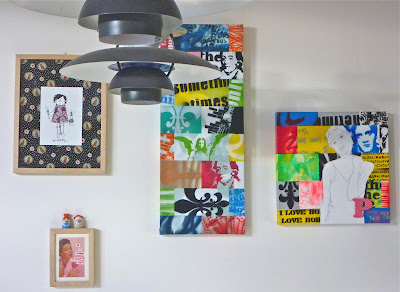 The paparazzi have tracked you down to your kitchen, where you are the shining star of your own kitchen dramas.  Just listed in our Etsy shop - our Shining Star potholder.

Do you recognise the words - we cut up one of our singsongs teatowels to see what would happen.  Next minute, tiny paparazzi are swarming the building.  Who knew?

Just listed in our Etsy shop, our 'do the fandango' cushion!!

It's a biggie, about 58 cm square.  We've listed it as a complete cushion, with its own (made by us) filled insert, so it's only available to Australian buyers.

Snap it up for your lounge, so you can sing along as you sip wine and flick through a few mags. 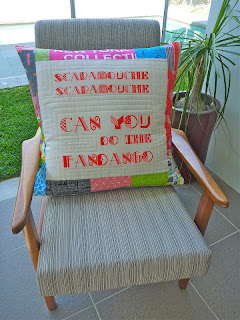 We've made a border from some of our very favourite fabrics - for any fabricaholics (anyone?), we'll provide a complete list of the fabrics in our Etsy listing.  Or as complete as we can make it.  Soon.

Can I just point out though, that SOME of the fabrics were purchased IN PERSON from Purl Soho in New York last month?  Oh I'm excited.

Do you all spy the queen?   And do you get why I'm pointing out the queen?  Leave it with you.

Email ThisBlogThis!Share to TwitterShare to FacebookShare to Pinterest
Labels: works in progress

We picked up our new wrap-a-round labels from our local print shop today - how snug (but ready to burst into song) do our singsongs teatowels look?   Better grab some now. 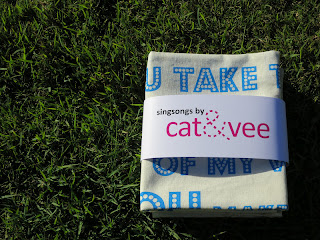 Vee and I are not particularly techno-able.  Since we started our blog, we have been on a constant learning curve.  Very steep.  Lots of stopping to look around and take in the view from various plateaus.  Lots of stopping.

But look out look out - we have set up a facebook page! - very soon, we will link it directly to our blog.  Oh the excitement.  Oh the realisation that we have GOT to get better and taking pics and posting them.

So, come on then, join us as we stumble through the whole new world of facebook - who knew it existed!! ... gosh ... thanks Mark Zuckerberg (that's his name isn't it, I've seen The Social Network) ... 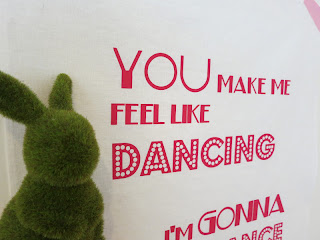 ps wait til we ask you to start 'liking' us, oh yeah, the time will come

I'm really not sure what it is about fabric, but good grief we love it.


My idea in posting tonight was to ask you to please pop over to lovely Amy's blog, to check out her very kind words and gorgeous pics of our cushion and potholder, now that they have settled in nicely to her home in Seattle - yah!!  So please, head on over ...

We met Amy through her designs on Spoonflower - in particular her mixtapes (80s) fabric, which we could use endlessly - that's a tiny piece of it there, next to the cowboy. 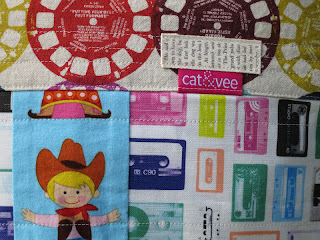 So. Speaking of fabric.  I thought I'd nip back over to Spoonflower and see what Amy's been up to lately. 'cos if there's one thing Vee and I need more of, it's fabric ... just ask our husbands ... go on, they'll agree with us ...


You really need to head to Amy's pennycandy Spoonflower shop, whether fabric is your thing or not.  She is so talented, I love all her designs.  And a couple of things did sneak into my shopping cart and make it through the checkout ...

.... so as a sneak peek, look out in future sewing projects for Amy's staxx fabric.  Can't even believe how much I love it.

Email ThisBlogThis!Share to TwitterShare to FacebookShare to Pinterest
Labels: fabric

:: get some singsong and dancing into your day ::

Vee and I are "loving ourselves sick" over our new Singsongs teatowel range, oh yes we are.

We have five designs that are bound to get you singing and shimmying around the kitchen.  We've printed them in a mix of colours, and onto a white linen/cotton blend teatowel and two different 'oatmeal' shades of 100% linen.   All totally gorgeous and fun.

Vee is our regular photo stylist and photographer, since she is so awesome at it (check out the product pics in our Etsy shop!) but as she is kicking up her heels in Sydney for the weekend, I promised I would try and do them justice for the blog post ...

...... cue frenzied running round the house looking for 'props' and then high-fiving myself (in my head, not actually, since that'd be a bit sad) for thinking to hang the teatowels on the wall with washi-tape ... :

Oh by now, I SO hope you have at least one of these songs in your head and find yourself singing it quietly - or loudly - for the rest of the day.

Pop on over to our Etsy shop and check out our listings.

A pillow (or as we say, a cushion!) made for Pip, using gorgeous Sherbet Pips and Bliss.

Back soon with some Singsongs teatowel pics!

A very quick post to say our Singsongs teatowels are now available in our Etsy shop - pop on over and have a look - we bet you'll be singing along too. 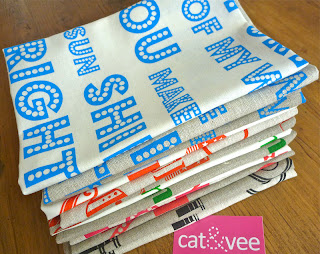 DO we have the PERFECT set of Tea Towels for you.

'Singsongs' by cat&vee will get you 'moving and shaking'......and that's not just the dishes!

Five Fab designs inspired by the 80's dags that we are!!

These will be available in our etsy store in the next few days.

p.s .... a note to the lovely Meredith.   We dedicate these tea towels to YOU.  You have inspired me
to study graphic design (even though I am the MOST technologically challenged person that you have  EVER met!)  I have just finished my Typography subject. We will send you a set!  xoxo vee