I've been making the most of the school holidays to squeeze in as much sewing as I can, so here are a few pics to share - taken on my phone, boo - my camera has been sent off to Canon to be fixed and I haven't yet come up with a better Plan B.

First up we have a trial-run Lisey Meow Meow bag.  This started out as a birthday pressie for the real Lisey Meow Meow, but it went pear shaped when I tried to insert my first-ever recessed zipper, while also sewing in inside-straps.  So it's become a keeper. 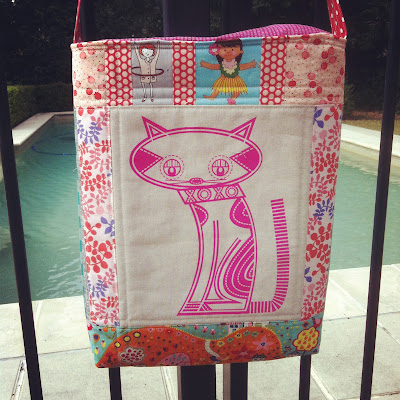 Next up we have a Pipsqueak ipad-cover, which is headed to Vee's house for her Christmas pressie stash.  Here's the front:

And the very cute back:
Aaaand the inside:

Next on the list is a sneaky peek at a bag I have made as part of a Secret Santa Swap, being coordinated by Kara from Me and Elna.  I don't want to say too much about it now, since I am guessing that if my swap-partner sees this pic, she could guess it's destined to end up under her Christmas tree ... I've finished it super-early, so I won't post it til I've got some good pics on my camera.  When my camera comes back from its enforced holiday with Canon, that is ... 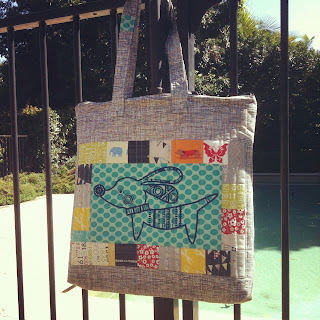 We have got a real Pipsqueak theme happening here, so let's see one more - this one is on its way to GnomeAngel Angie's house already.  Do you see the gnome?!  And the teeny tiny angels!? (they're actually Saffron Craig fairies, but I am pretending they are angels).

Last pic for the day - I used Jen Kingwell's very awesome Carnival Alphabet pattern (purchased last week from Amitie during our trip to Melbourne) - to create two 'read' cushion fronts.  I love love love them and can't wait to get them finished and then think up some more words to make.  The pattern is really straightforward, and the letters come together really quickly - the only real trick is umming and ahhing over which fabrics to use! 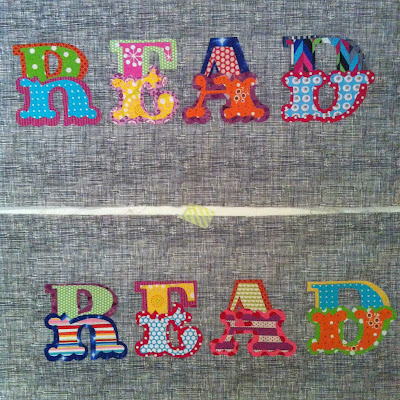 OK that's it for today.  Hope your week is a good one.  xoxo cat

Email ThisBlogThis!Share to TwitterShare to FacebookShare to Pinterest
Labels: sewin' with the home-ies, works in progress, zip pouch